This shit is literally impossible! It’s making me not even want to play this game at all, bro it’s so god damn frustrating. These weak ass crybaby glitchers, KayleeeeeeeeG, KyrieChen, zczachlolz, all these bozos with the empty squares for names it’s im-f!cking-possible. I’ve been 11-0 TWICE this year both 12th games I was winning, got glitched out, matched up with the same person and lost. My current record is 55-17, 72 games. I know for a fact I’ve played at least 100. Every time I even sniff the POTM I run into one of these punk ass glitchers and they they steal wins from me every time with the “Game will not be counted” or some “report image” nonsense that magically NEVER happens when I’m losing. Unlike TyDebo or RCA I’m not unbeatable, eventually I will run into someone who is playing fair and just beats me, which of course isn’t a huge issue until you have to go 12-0.

Then I made a thread here asking how to combat it, radio silence.

PC Game not will not count glitch MyTEAM

How do you do this? I ran into the “Game will not count glitch” 4 times in a row with a punkass user called “KyrieChen” on PC he did it 4 times in a row because I was beating his ass (matchmaking is weird on PC. I play the same like 10 people 90% of the time) then he finally gets a decent lead on me and of course the game is stable. I have no issue taking deserved losses, that’s part of the game, but I’m not gonna give a guy the win if he behaved like this it’s bitchmade as hell. How do I get h…

So now I’m stuck in an infinite loop of running into glitchers with no way to ever progress other than getting impossibly lucky with 12 straight games of fair players that I can beat. This shit sucks.

I get the obsession over going 12-0 but it’s honestly not even worth it. Don’t stress over it - Iggy is literally just a cone.

I don’t think any of the rewards have been super great, but the way my team is built, he fits it perfectly. Especially since he’s free, I’ll be able to sell MJ for some MT.

Also there’s nothing else to play for in MyTeam. Limited is only for weekends, TTO is useless after you get the player rewards, it really just sucks that the main mode is ruined by this. So I’m stuck grinding TT hoping the vault opens

I like Iggy. But I agree there’s no reason to be obsessed with those reward cards. The problem is if someone is neither obsessed nor addicted to the grind there no reason to play - not fun to be honest.

Come over to ps5 man.

I’m XB gang forever (sony did me dirty back in the ps3 days) but even still, I haven’t even been able to sniff a console for retail price. Also 2K can burn in hell when I finally get one. I’m going straight to 2077

Pay someone. Not sure about pc but on ps it’s about $30 and well worth it

I don’t think it’s possible to do on PC unless you rig matchups to “boost” or whatever that’s called.

$30 for a bench player isn’t worth it, man. Especially since they could drop somebody better tomorrow and that’s just a waste.

I wish it was just bots. I’m running into hardcore, comp-type sweats, who either kick my ass because I have a bad game or glitch out because I’m beating them down smh

Yeah sorry bro, PC is unplayable if you care about the Unlimited Rewards.
You can either stop caring so much or stop playing.
I decided to stop playing, partly because of how bad the game is and partly because of these coward ass b******* that can’t take a loss even if they have the best squad in the game.

The worst part is they try to beat you up until the last min and then quit. If they would at least realize that I am fkn better at the game and they probably won’t win and glitch in the 1st it would be OK. However, they waste half a fkn hour of our time and then don’t even allow us to get that W…

It really is hard to accept and i would love their computer to explode.

Well there’s that, too. Between bots and people who glitch games I think it’s almost literally impossible to go 12-0 unless you glitch yourself.

Pay someone. Not sure about pc but on ps it’s about $30 and well worth it

i dont care about this really

old times i was very worried about, but not now.

is a game, and your opponent can use different tools to win the game.
i mean, is worse Glitch a match than play it with:

for me there is no difference

Nah. Nobdoy just beats me with cheese. Some opponents can beat me with good offense, but if all you have is cheese, that’s an easy W for me. I’d rather face 12 straight cheesers than 1 glitcher.

i understand your point, but for me isn’t a MUST WIN game.

i enjoy the match itself, i dont care about if i win or lost if my opponent plays like a basketball game.

Me too, man. A guy beats me fair and square then I respect it, because I play good basketball, you have to at least play smart to beat me.

It’s the fact that these guys glitch so they get to restart the game over and over until they get a favorable outcome against me that’s the issue. Sometimes I beat the same guy into glitching out 4 times in a row but the 5th time he just gets the rng luck of knocking down whites.

The worst is that some of these players are actually good and I’d respect them if they didn’t glitch, but they’ll play me down to the wire then glitch out soon as I seal the W

I feel you! I gave up on playing MyTeam for good. It’s cancer, and on PC it’s even worse since all of the best cards went for 1 mil. plus without the badges that are also very expensive. It literally made the game into a pay to win mode.

My last game was against a guy who had the best team at the time and he was running Quick Horns Flare 4 all the time and there was nothing I can do to stop him because if I don’t contest his Ray Allen 3p shot (and contest him hard) he is going to hit a wide open 3. But if I do manage to contest he will just drive to the basket and dunk on me. And if i try to anticipate the pass to Ray Allen he will drive with his John Wall and dunk on me. Or throw is to his center and dunk on me. It was basically pick your poison. Meanwhile I shot 20% from 3 even though the shots were mostly open.

I went into a rage after the game and deinstalled it(again). Right now I am enjoying Total War : Three Kingdoms. It’s much more fun and actually rewarding and it doesn’t make me want to break something after I finish playing. If the game is getting to you, I suggest you do the same. 2k21 current gen is absolute dogshit and it’s no use getting nervous over it. Hopefully 2k22 next gen will be playable but 2k has screwed us over too many times.

your opponent running quick horns because he can do it.
the game itself allow to do it.

you could try to glitch this match, and doesn’t count.
because the game itself allow you to do it.

11-0 for the third time this year. I think the secret is playing unlimited late night while all the sweats/glitchers are playing Limited. Most games were blowouts, only ran into one glitcher. Unfortunately I got sleepy and the matchmaking was taking forever. I woke up nervous as hell to finish my last game. I load in, get matched up, he quit in the lineup screen! I was so relieved I laughed for 5 minutes straight 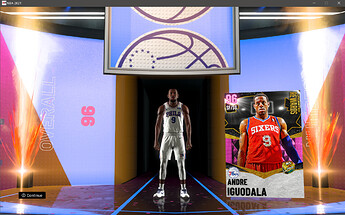 Whe PC glitchers “glitch” you out of the game do they get the win or does it just not count for them?